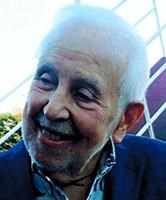 FUNERAL HOME
Alfieri Funeral Home
201 Marguerite Ave.
Wilmerding, PA
Dr. Franklin M. "Frank" Parisi passed away peacefully surrounded by his family Saturday, Jan. 8, 2022. He was 88 years old. Frank was the loving father of Jason Parisi, Christina Parisi and Lisa (Ephriam) Parisi-Hill and grandfather of Gibson Hallisey; brother of Jerry (Barbara) Parisi, Millie (late Tom) Morris, late Mary (Nick) Mazzie, late Clara (Carl) Tuskan, late Edith (Lou) Botti, late Dominic (surviving Clara) Parisi, late Joseph (Joy) Parisi and late Rosie (Jim) Ruffo and uncle and friend of many. Born in Wilmerding, he graduated from Westinghouse Memorial High School, in 1952. He later graduated from Palmer College of Chiropractic in 1962. Frank was a doctor of chiropractic for 60 years, owning his own thriving practice. He was open and serving his community until the very end of his life. If you were ever in his office you knew how happy he was to be there. His happiness came from serving and helping others heal. Frank was very proud of his heritage. He was a first-generation Italian-American whose first language was Italian. Nothing was more important to him than family and the traditions his mother passed down to him. Those traditions were honored up to his last Christmas, and will be continued. Frank was an avid gardener and his zucchini flowers will be missed by anyone lucky enough to eat them. He was a lifelong active member of Concept Therapy and has many friends from C.T. Above all else, Frank was a beloved father and grandfather to three children, who always thought and still think he is their hero. All services will be private. Arrangements are entrusted to ALFIERI FUNERAL HOME INC., Wilmerding. Please visit us at www.alfierifuneralhome.com for online condolences.
Published by Triblive Online Only on Jan. 14, 2022.
To plant trees in memory, please visit the Sympathy Store.
MEMORIAL EVENTS
To offer your sympathy during this difficult time, you can now have memorial trees planted in a National Forest in memory of your loved one.
Funeral services provided by:
Alfieri Funeral Home
MAKE A DONATION
MEMORIES & CONDOLENCES
Sponsored by Alfieri Funeral Home.
0 Entries
Be the first to post a memory or condolences.