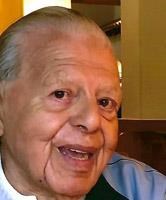 BORN
1928
DIED
2021
FUNERAL HOME
Frank F. Gigler Funeral Home
2877 Leechburg Rd
Lower Burrell, PA
George L. Plumbo, 93, of Lower Burrell, passed peacefully Monday, July 19, 2021, at home with his wife, Carrie, at his side. Carrie (Cherre) Plumbo, of Vandergrift, and George were married for 40 years. They were inseparable, loving and devoted partners and parents who shared children from their previous marriages. George was born in Wendall and grew up in Russellton until he served in the Korean War. He later moved to New Kensington, where he raised his two sons. He worked for General Motors for 30 years. And was an activist for the UAW (United Automobile Aerospace & Agricultural Implement Workers of America) serving as a union officer for many years. He was an active member of the Veterans of Foreign Wars, American Legion and Eagles and Owls Clubs. His passion was baseball! He touched thousands of people's lives through his love of the game. As a teen, he played shortstop on the infamous West Deer state champion legion team along with this brother, Carl. His passion carried him from his childhood diamond in West Deer, to being one of the oldest Western PIAA umpires at 88 years young. He was a manager/coach for nearly 20 years in Twin City Little League and St. Joseph High School in Natrona Heights before pursuing umpiring. George was a member of PIAA Baseball and Softball Umpire Association. He loved the Pirates, rarely missing a game whether on the radio, TV or at the stadium. Baseball knew no greater fan. This was a man with a big heart. He affectionately called everyone "cuz." He along with his wife, Carrie, volunteered at Meals on Wheels for 10 years, were active members of Saint Margaret Mary's Church, swam on the YMCA Masters swim team and played in Bocce tournaments. A few days before his passing, they were dancing and singing, a joy they truly loved. George's parents were Rose (Forcado) Plumbo and George L Plumbo Sr., of Russellton and his brother brother was Carl "Crow" Plumbo. He had two sons, George Jr. of, Queenstown, Md. and Gerald "Bo" Plumbo and wife, Wendy, of Bradenton, Fla. He has three wonderful stepdaughters with his loving wife Carrie, Cynde Cherre Kahn and husband, Dr. Steven Kahn, of Miami, Fla., Kim Cherre, of Apex, N.C., and Susan Cherre Gillespie, of Oregon. He is also survived by his grandchildren, Ryan, Alex and Elizabeth Plumbo and Brandi Rose and Jordon Gillespie; nieces and nephews, Pam Poston and husband, Bob, of Jefferson Township and Russell, of Creighton. A private service and interment, entrusted to the FRANK F. GIGLER FUNERAL HOME INC., will be held at Lakewood Memorial Gardens Cemetery with Father Kenneth Zaccagnini officiating. Donations for a memorial bench to be placed at the ABC baseball fields in Braeburn in his honor can be made to the Frank F. Gigler Funeral Home, 2877 Leechburg Road, Lower Burrell, PA 15068, (724) 335-6500. Condolences are welcome at www.giglerfuneralhome.com.
To plant trees in memory, please visit our Sympathy Store.
Published by The Valley News Dispatch on Jul. 21, 2021.
MEMORIAL EVENTS
No memorial events are currently scheduled.
To offer your sympathy during this difficult time, you can now have memorial trees planted in a National Forest in memory of your loved one.
Funeral services provided by:
Frank F. Gigler Funeral Home
MAKE A DONATION
MEMORIES & CONDOLENCES
Sponsored by Frank F. Gigler Funeral Home.
1 Entry
Knew George from our Twin City Midget League days. I will always remember our meetings and the fun we had. George, Clem, Walt. Mark, Frank, John accomplished so much in getting lights and fencing at the 18 street field. It brought night baseball to the TCML. Farewell George you will always be missed. George and Bo you had a great Father. Chuck Picone
Chuck picone
Friend
July 22, 2021
Showing 1 - 1 of 1 results