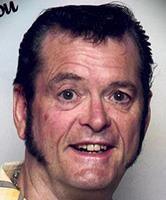 BORN
1945
DIED
2021
FUNERAL HOME
Redmond Funeral Home Inc
524 High St
Freeport, PA
Ronald G. "Ronniecat/Elvis" McKenna, 76, of Freeport, passed away peacefully at his home Wednesday, Oct. 13, 2021. Ron was born Jan. 10, 1945, in Butler, a son of the late Eunice "Tippy" M. (Durst) McKenna-Hidinger and Francis E. McKenna. He was employed as a welder and a painter at Railway Maintenance Corp./Portec, Fox Chapel, for 25 years, retiring in 1989. Ron had also worked as a machine shop supervisor at Areotec in RIDC for 10 years. Ron was a social member of the Freeport VFW. He played lead and rhythm guitar for a few local bands over the years. He enjoyed playing music, camping, going on casino bus trips, traveling to Cocoa Beach, Fla. for the winter, going out for dinner and gambling. Ron is survived by his longtime companion, Vincetta Elter; brother, Bruce "Big Mac" McKenna, of Creighton; sister, Susan, and Jeff Swiklinski, of Buffalo Township; and nephew, Barry McKenna, of Creighton. He is also survived by Donald and Nicole Elter, of New Kensington, and Richard and Charleen Elter, of Sigel, Pa. Ron was preceded in death by his parents; and his sister, Maureen "Reen" Stivers. Family and friends will be received from 5 to 7 p.m. Friday, Oct. 15, in the REDMOND FUNERAL HOME INC., 524 High St. in Freeport. Burial will be held in Brookland Cemetery in Allegheny Township. To send a condolence, visit www.redmondfuneralhomeinc.com.
Published by The Valley News Dispatch on Oct. 14, 2021.
To plant trees in memory, please visit the Sympathy Store.
MEMORIAL EVENTS
Oct
15
Visitation
5:00p.m. - 7:00p.m.
Redmond Funeral Home Inc
524 High St, Freeport, PA
Funeral services provided by:
Redmond Funeral Home Inc
MAKE A DONATION
MEMORIES & CONDOLENCES
Sponsored by Redmond Funeral Home Inc.
1 Entry
I worked with Ronnie and welded in the next welding stall next to him for years! Ronnie was truly one of a kind and there wasn´t a day he didn´t make me laugh! Ronnie called me every few months to let me know which of our coworkers passed away or to talk about our pension or just to remind me of one of his stories of our work days together! Ronnie you´ll truly be missed! My deepest sympathy goes out to his family ! God bless!
David Wolfe
October 14, 2021
Showing 1 - 1 of 1 results